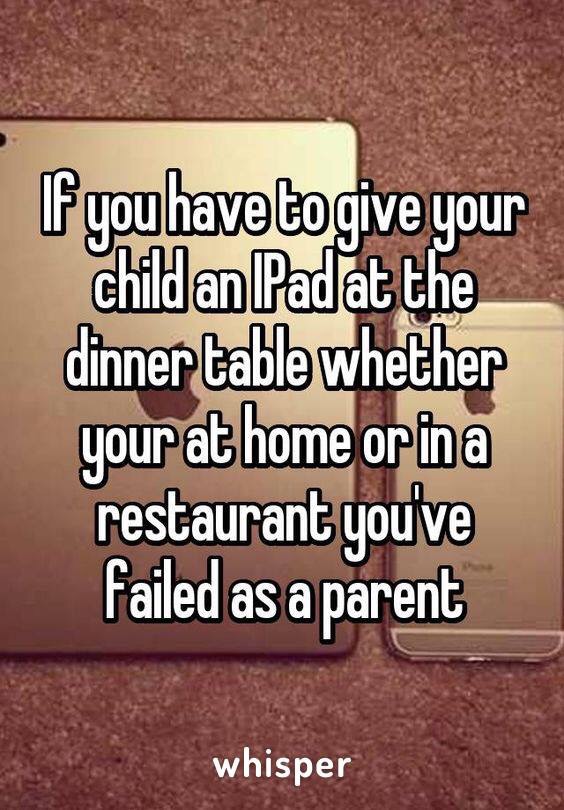 I saw this photo on Facebook a few weeks back and it took a lot not to comment on it (I actually deleted the person who shared it so I didn’t have to see that negativity again). Saying that someone has failed as a parent for something so trivial as letting your child watch Mickey Mouse clubhouse at the dinner table is a far stretch. And often enough the people who are so quick to throw stones at others are ones who aren’t perfect themselves. So why do people feel the need to shame other parents for the way they raise their kids? Though it’s a flawed quality, everyone at some point is guilty of passing judgement; but having a thought/opinion about someone is a few steps short of publicly shaming someone/group of people.
There are so many parenting topics that constantly come down to two groups shaming the other group for their choices. To be more specific, hot topics I see too often are: proper car seat installation, vaccination, breast/formula feeding, and so many more. I’m not here to give my opinion on each topic (although I’d be more than happy too!) I’m more concerned with how far some people go to get people to their side. In my experience people are usually set in their ways and opinions, starting a Facebook argument will not make them change their minds. But in the social media era where everything is put online to be judged, shared, disputed, or made fun of, it’s hard not to see daily Facebook arguments. (Ok, fine just one opinion. vaccines don’t cause autism and even if they do, as a parent of an ASD child, i would take autism over polio or measles any day of the week. That’s my only one!)

To get to the actual picture that sparked the interest in this post… I’m not sure if the person who created this means parents who let their children in front of tv/games/iPads/etc all day every day or if this just means if you have ever let your child take an iPad to the table you suck. I do believe children should be limited to amount of electronic time they’re given, but I also am I fan of electronics and believe they do help my son. He can sit on the computer and play abc mouse as long as he wants for all I care (he’ll lose interest before it becomes an issue anyway) but I’d rather have him playing educational games than play something that doesn’t help him in any way. Playing Mario kart helped Eli with his hand eye coordination, abc mouse website helped him with colors, his iPad has educational apps. Aside from what electronics do for him educationally, it keeps him occupied. Eli has a lot of issues eating and mealtimes can be a hassle. If I need to bring out an iPad to keep him at the table long enough to finish a plate of food, you bet your sweet ass I am. And when it comes to restaurants, a parent can’t win. If our children are hyper, running around, or throwing a tantrum we’re judged and stared at or even asked to leave. But according to this meme if we occupy our children with iPads so they are well behaved, we are crap parents who have failed at life. Not many children are perfect angels 100% of the time and can sit still, follow directions, and eat their meals silently. Most of the time my child refuses to eat and sneaks goldfish or dry cereal in lieu of a meal. I will use whatever means necessary to get my child to do certain tasks, as a parent sometimes you just gotta do what you have to do and that does NOT make you a bad parent. Between 3 types of therapies, constantly talking with companies and insurances, getting into schools and sports, attending IEP meetings, and personally getting my son to the same level as his peers, letting him watch Netflix while he eats white rice at the kitchen table doesn’t have an affect on my parenting. I have far from failed as a parent and whoever created that meme can kiss my imperfect behind. 💁🏼